Don't let the title fool you into thinking this is a Masterpiece Theatre Henry James styled soap about croquet and tea parties. For, although one of the main characters in writer/director Jason Freeland plays a song called "Garden Party" while performing at such an event-- the environment is anything but idyllic.

Set in Los Angeles a.k.a. the city of angels where it seems there's more devils than ever before eager and willing to exploit, manipulate, and use--all with a smile or a fistful of dollars, of course-- the dreaming angels now seem lonelier than ever.

On one level the film's poster and DVD cover for its Lionsgate release tries to titillate and entice the average passerby to gawk-- similar to the way the characters are used for their sexuality and youth by predators, unsavory photographers, and more. Yet on another level, it's both shocking in its innocence of so many young people nearly naked in their insecurity and carnivorous landscape having come a long way from the pool parties of their childhood. And, this being said-- frankly, they're supremely lucky to still find that their heads are above water. Likewise, it doesn't seem like an accident that the gorgeous, light-filled city landscape is behind them-- just out of reach-- tempting in its contradictions of being both so accessible and so overwhelming at the same time. 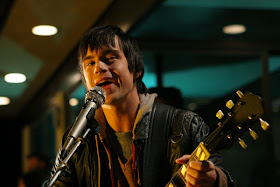 Decades earlier, in the unofficial New York City anthem, "New York, New York," the lyrics from the Liza Minelli version called out the promise of "if I can make it there, I'll make it anywhere," but as people have begun to filter out from the east, Midwest, south and every region of the United States to try and grab that irresistible slice of the Hollywood dream, now more than ever, those lyrics truly apply to Los Angeles.

Filled with the stories and hopes of yesteryear of actresses being discovered in a malt shop or walking down the street, the city beckons to the dreaming outsiders who-- more often than not-- feel that although they don't fit in in their small towns, they're just sure they'll make an impact in show business. Yet, in addition to the aspiring artists, Hollywood-- perhaps because it's the dream factory after all-- seems to attract those longing to escape a horrible existence whether it's abuse, neglect, or secrets from the past.

In writer/director Jason Freeland's film Garden Party, he manages to create an ensemble piece primarily about five individuals (although others jump in and out of the pool, if you will) all struggling to not only get by but get ahead, whether it's just to make a living or become a star. The film was shot and set in the filmmaker's Echo Park neighborhood with stunningly artistic and sharp cinematography by Robert Benavides which adapts to every surrounding stylistically (and seems to cast a blue filter over some of the scenes throughout). A character driven work that at times feels like it was derived from too many short stories or anecdotes strung together, Garden Party is nonetheless bolstered by its talented and completely convincing cast in what seems like a remarkably authentic and personal insider's view of the harsh realities of La La Land. 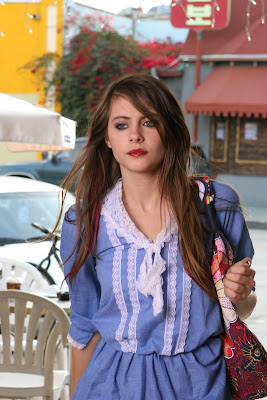 After she's abandoned by her stripper/cocktail waitress mother and forced to live with her stepfather who's overly fond of leering at her in the shower, the young beautiful April (The O.C.'s Willa Holland) makes an impulsive decision to get as much cash together as possible and move out. When a friend tells her about Dirk (a horrific Eric Bragg)-- a creepy photographer who will pay her hundreds to pose nude for his website-- April in turn pays him a visit before ultimately moving into her lesbian cousin's apartment.

While April's main ambition is to declare her independence, Sammy (Erik Smith) arrives in town, homeless, hungry, and eager to join a band. Incredibly talented (and indeed the actor plays his own material), Sammy lucks his way into a gig and a pizza at his first audition and later finds a place to crash with the sexually confused, aspiring dancer Nathan (Alexander Candese). Working for a high-powered top Los Angeles Realtor, Sally St. Clair (a terrific Vinessa Shaw), Nathan looks after one of her residences, tending to her locked "garden" a.k.a. a greenhouse full of homegrown pot that she uses to garner more listings and hold onto her top spot in the market. 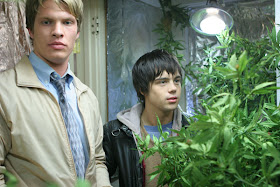 Although Nathan continually reminds Sally that he's just her assistant--to her that definition means he's on-call twenty-four hours a day as he's easily replaceable as soon, we discover Sally's ingenious Modus Operandi for luring cheap, eager, and loyal labor as the mother (or Diva) hen, handing out her business cards at a local coffee shop and helping give newcomers to town a leg up on L.A. Of course, what Sally considers to be the opportunity of the lifetime does involves marijuana and strange situations which soon reveal themselves after a motorcyclist assists her one evening in ridding her designer heels from chewing gum. 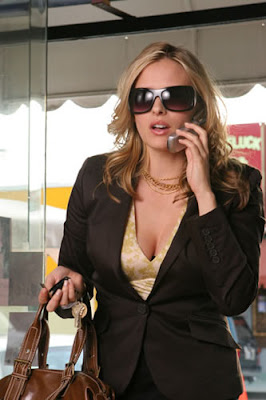 Linking together Sally's plot with April's (which mirror each other until later they become acquainted), we realize that Sally had also been exploited by a photographer when the obsessed motorcyclist Todd (Richard Gunn) makes an indecent proposal to help her get those photos off the web. Of course, Sally is no babe in the woods and she takes him up on his offer which leads to a tense showdown as she confronts her past head-on in a hold-up.

In its roughly ninety minute running time, Garden Party seems equally concerned with the way that technology is used to manipulate and hold sway over individuals with the world wide web, camera phones, social networking sites, and the nearly total lack of individual privacy as it is with the Los Angeles setting. And while sometimes its unseemly surroundings, situations and characters begin to twist your stomach into knots as Freeland once or twice seems to go over the line from explorer to voyeur himself-- in the end, it's a compelling and richly crafted independent film.

Impressively the type of work that leads us into it with a few predictions that soon get tossed aside as it goes on-- while the baggage, kinks, quirks and eccentricities of its ensemble remain front and center, ingeniously Freeland manages to make us ask some startling questions of just whom is really manipulating whom as a few of the leads including the disgusting low-life Dirk wear their profession and true intentions on their sleeves and others try to hide it away under the camouflage of makeup, layers of clothing, the heat of the L.A. sun, or by trying to stay in the water as long as they can without drowning. Unsettling but compelling and a good cautionary tale to show those longing to just run away with five bucks and a dream to the city of angels, Garden Party is now available on DVD from Lionsgate, Roadside Attractions, and Lookout Films.
Jen Johans
Share
‹
›
Home
View web version